A couple of minutes had to pass before Jesse could be able to regain his speech. After two whole years, she was standing right there, in front of him. It was a strange, surreal moment, but his sudden headache and loudly pounding heart made it clear that he was not in some kind of weird dream state, but actually living all of it.

Skye must have been equally surprised as him, if not more, for she still hadn’t been able to utter a word.

“Skye…” Jesse finally mumbled “what the fuck… all this time you’ve been living here? In this… place?” 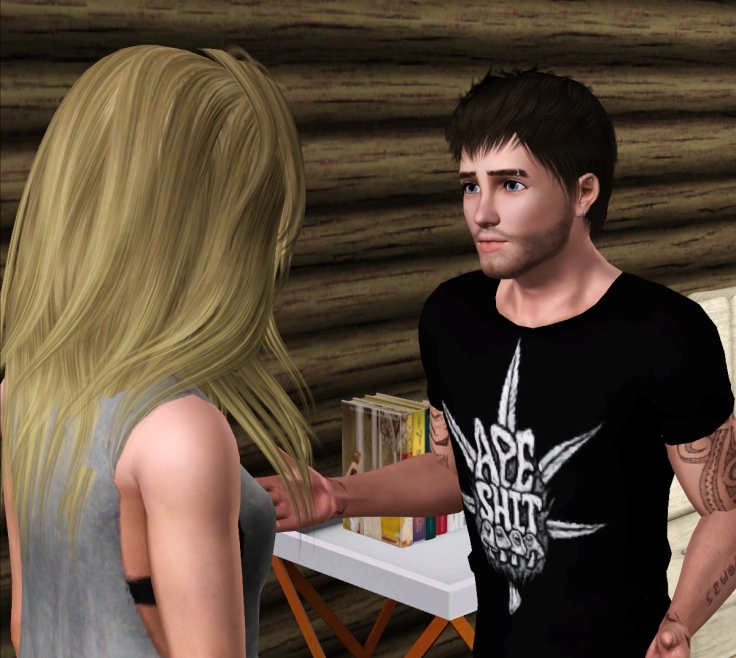 “W…what are you doing here? How did you find me?” she asked instead of replying.

For a second, there was nothing that Jesse wanted more than to take her into his arms and hold her as tight as he could, smell her hair, caress her skin and never let go again. But after that brief sentimental bit, a stronger moment of clarity hit him hard: he realized he got caught up in his recent burst of emotions so badly, that he failed to take into account that she had left him in the first place, without even a smidge of a decent explanation; and that he swore he’d do as she had asked – never look for her and eventually forget her. That moment, his swarm of feelings turned into just anger; not so much towards her, but mostly towards himself.

“It’s a long story… But does it matter anyway?” he said coldly “Honestly, I didn’t really expect to find you… ever. But here you are. Nice to see you’re at least alive.” 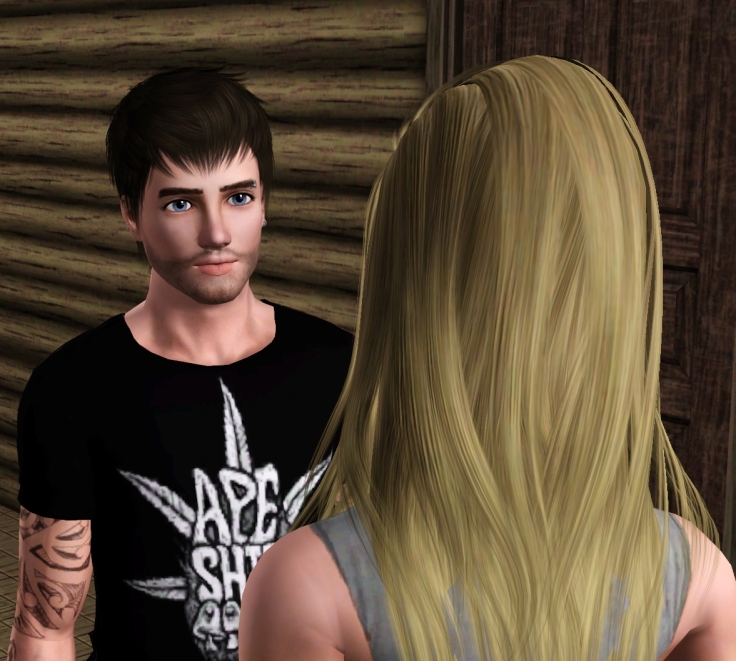 But if he was cold, she was the Ice Queen herself. And it still hurt. “So… what? You searched for me just to make sure I’m still alive? Jesse, you have to go. You know, Travis will come here any minute now…” she muttered, and that name alone was enough to make Jesse start losing it.

“So you’re still with him.” 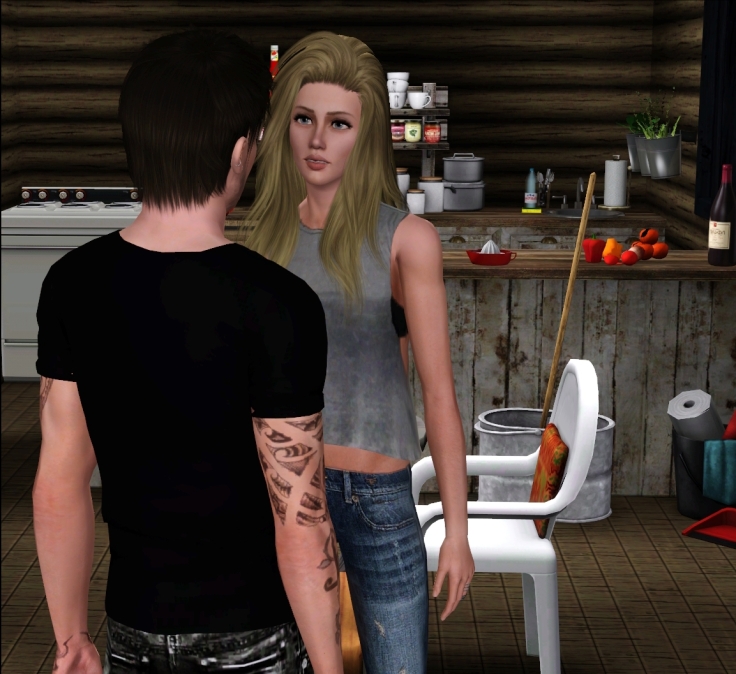 “Yes you are…” he repeated, dangerously closing the gap between them and feeling his blood beginning to boil inside him “And you live with him, here. In this old fucking shack. He goes out every day chopping wood or whatever the hell he does, and he has you here gathering supplies and cleaning the house?” 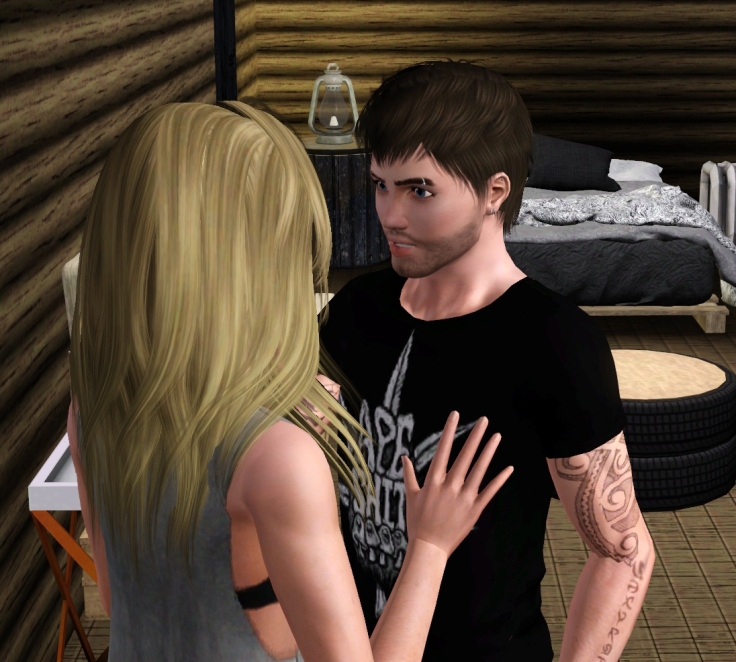 “And every day you cook in those rusty old pots, and you eat on that greasy old table, and then every night… every night, he comes home like the man of that joke of a house, and you fuck on that dirty old bed? Is this your life now?”

Skye didn’t respond. Instead she hung her head, avoiding any form of eye-contact. 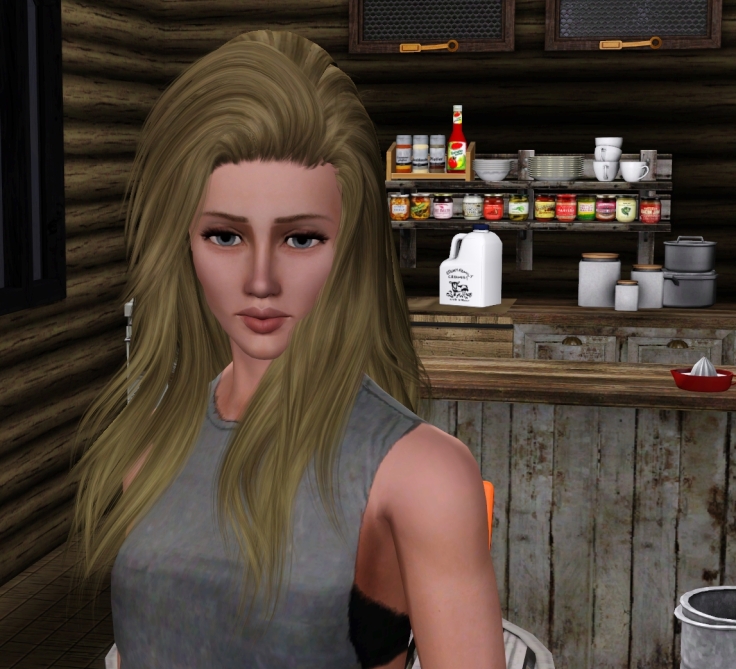 “…So help me understand something Skye” Jesse continued “because I sure as hell couldn’t do it with that sorry excuse of a letter you left me two years ago, and I still can’t: Is he a better fuck than I was?”

“You heard me! You can’t love this guy Skye! How can you be with a guy who has you living like this? This is not you, I know you! Help me get what he has that I didn’t have, because I’m at a loss here! And it’s driving me fucking insane!” 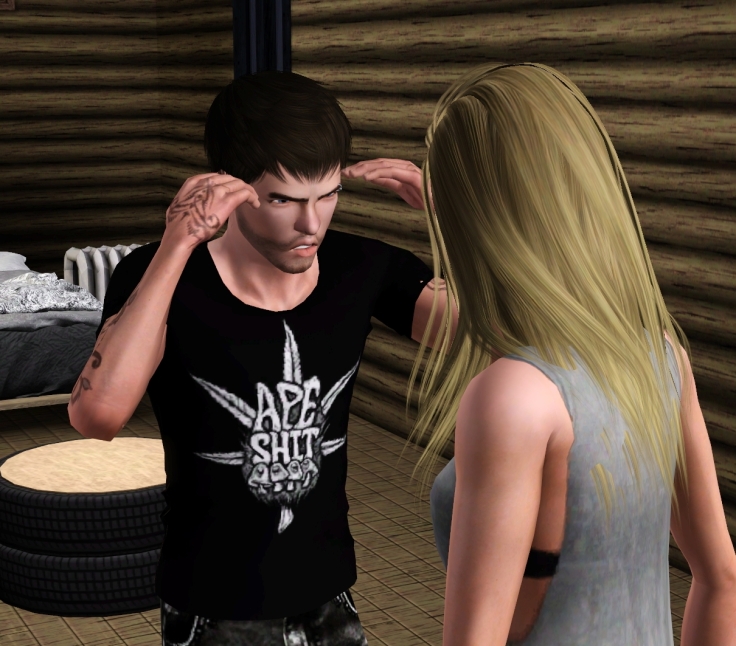 “Jesse, whatever happened between us was two years ago. I thought you’d have moved on by now… I just… I still can’t believe you’re here… how did you find this place? And why? I thought I asked you to stay away from me!”

“Because… fuck, I thought I had moved on! But apparently I haven’t. And when Owen told me he saw you here… I don’t know. I just had to see you.”

“Owen saw me?” she asked with her eyes wide open. They regained their closed, furious form mere seconds later. “…Well it’s not my fault you haven’t moved on, Jesse! You shouldn’t have come! I’m perfectly fine here. You think you can just come into my house like that and insult me? You act like a crazy stalker, you know that?” 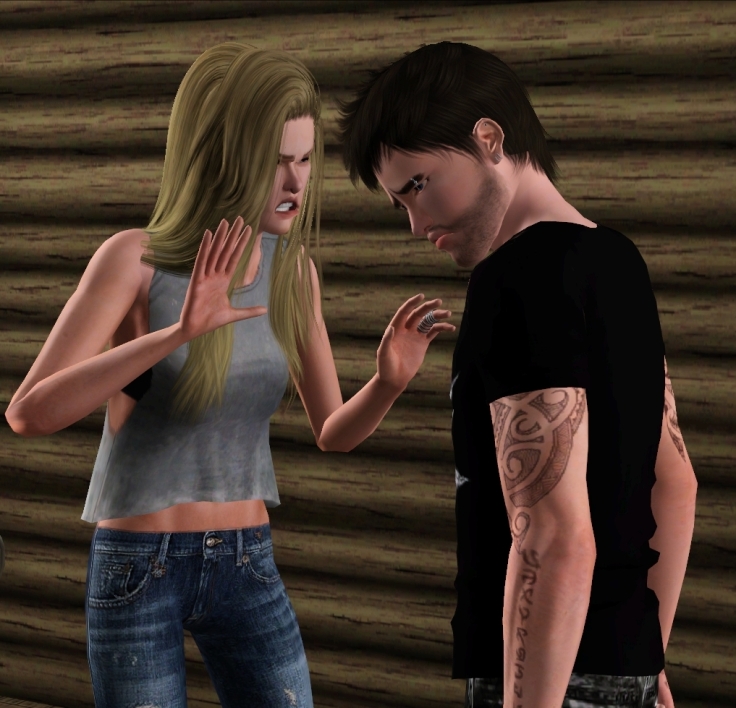 “I thought that… fuck… didn’t you hear our songs? Silence and a heart? Decomposing abyss? I wrote those for you! It was my only way of feeling you close even though you broke my fucking heart!”

“I haven’t heard any of that.” she replied matter-of-factly, not a hint of emotion in her voice. 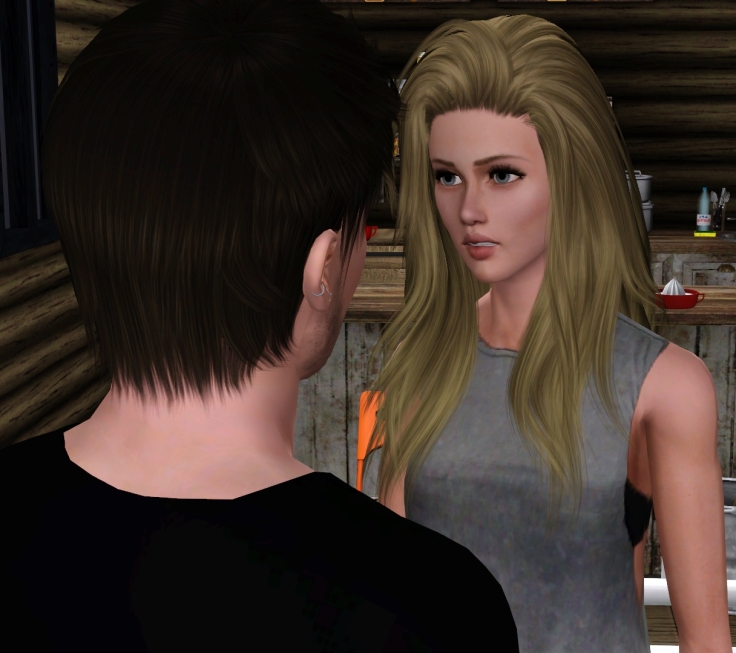 Seeing Skye dismiss him so strongly when all he wanted to do was make things go back to the way they were, hurt bad. But Calla’s words from two years ago had finally hit home. Something didn’t quite add up. It wasn’t Skye’s style to live like this. He realized he still didn’t know her like he thought he did, but at least he did know that much. Something was definitely off.

“I don’t buy it! I don’t buy any of it now that I see you at this state! I have eyes you know! I can see this fucking place and I can see you! You’re not fine Skye!” 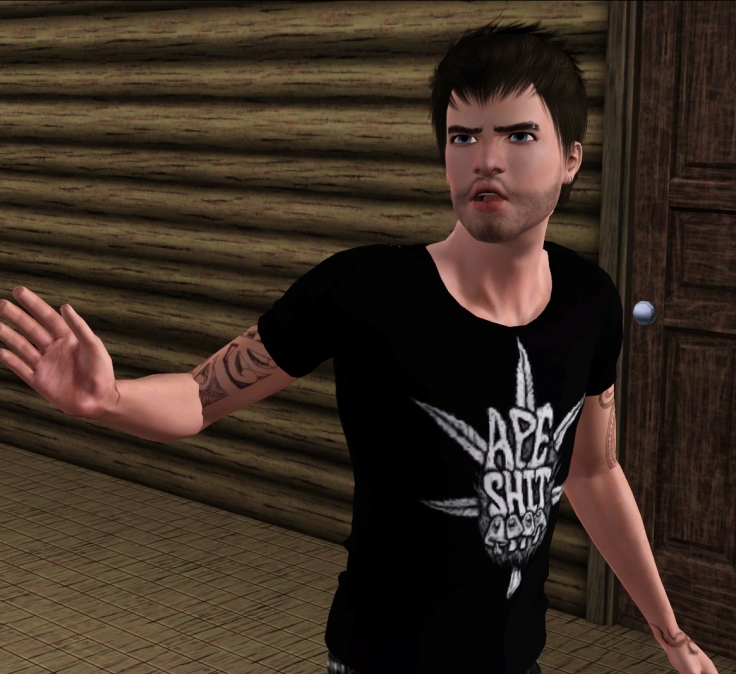 “Yes, Travis is a better fuck than you are! Are you happy now? Are you satisfied?” 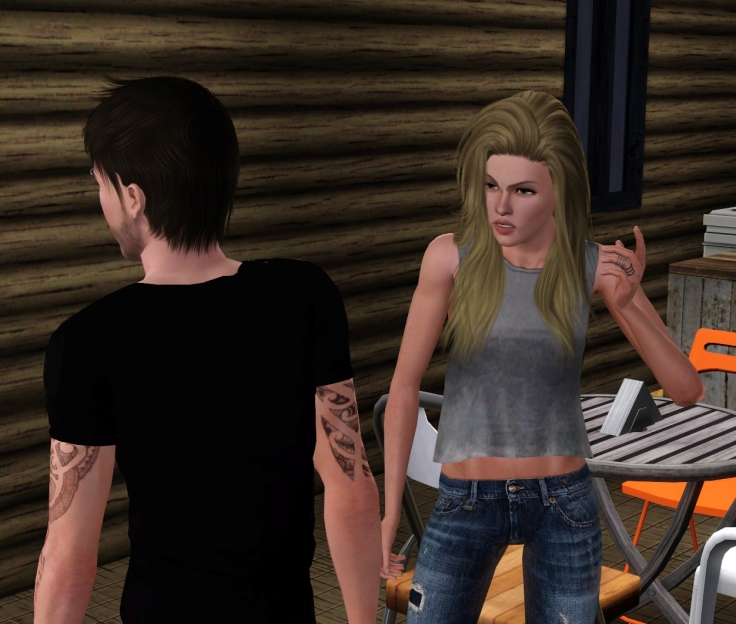 “Well fuck you!” He immediately regretted his words. “Why can’t you be honest with me for once? Don’t I at least deserve a real explanation why you left me like you did? Just tell me the goddamn truth!”

“Get out or I’m gonna call the police!”

“Do it! I’m not leaving until I see this guy! Maybe he’ll give me a better explanation than you did!” 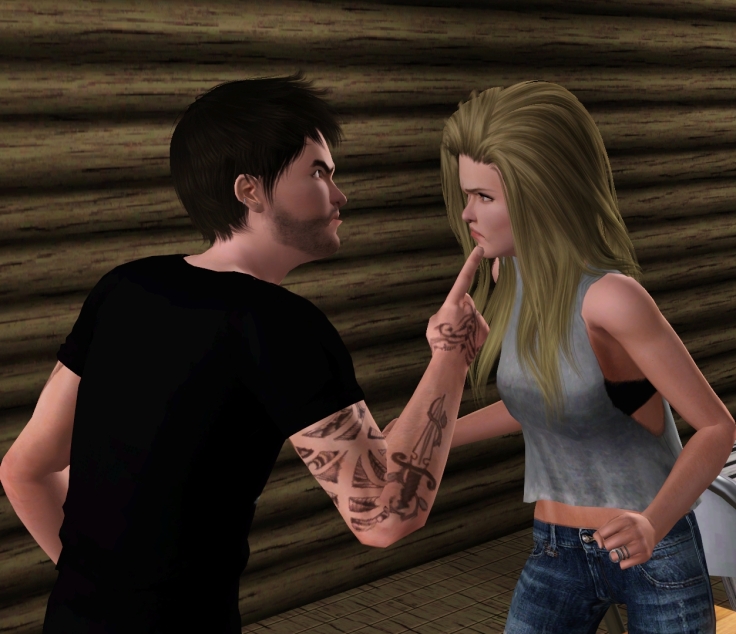 “Well good luck with that! He hasn’t shown up in three weeks, so I don’t see how he would show up now!”

Jesse gave her a stunned look. He didn’t expect that answer. “That son of a bitch left you here?”

“That’s none of your business…” she replied, now more defeated than angry “Can you please just leave me alone? I’m so tired Jesse… of everything” 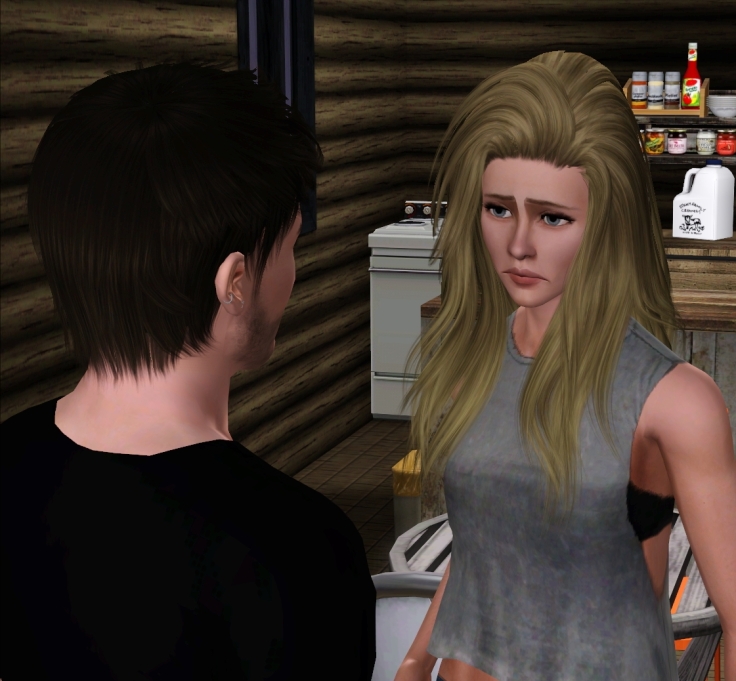 “Skye… please talk to me… what happened?”

“He came over once a week for supplies and stuff… but now… I don’t know. Maybe they got to him again… I wasn’t supposed to be outside but I needed some food… damn… my head hurts like hell…” 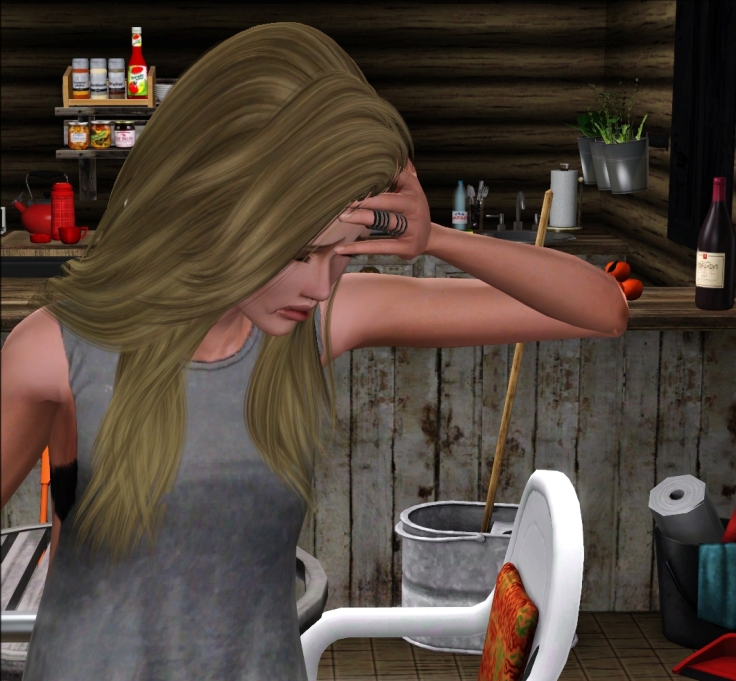 “Who got to him? Your step-father? So all this time it was true, you’ve been hiding from him? For fuck’s sake… Calla was right” he murmured that last part to himself.

“Jesse, please. Go away. If Sinbad got to Travis and he betrayed me again, then… I don’t have much time left. I don’t know where else to go or what else to do… I just know that you have to leave, please.”

“What do you mean he betrayed you again?” 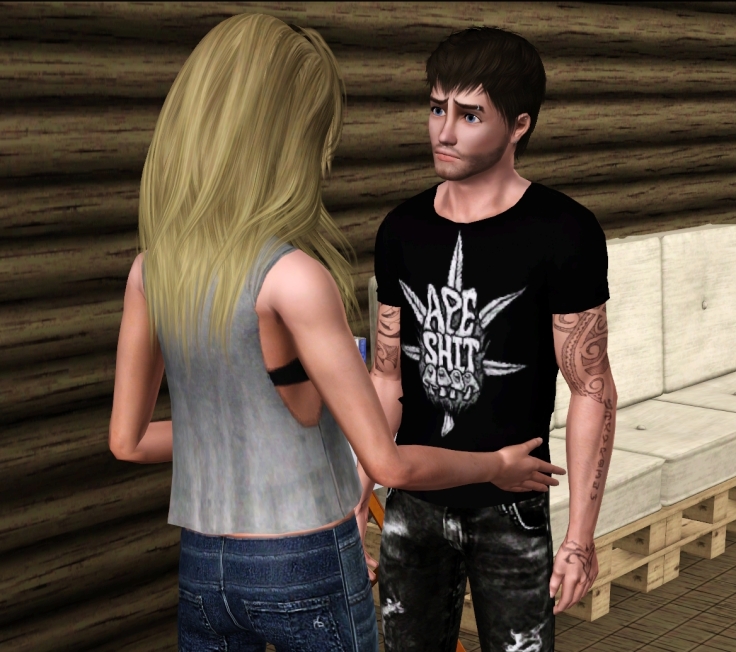 “No” Jesse said “No way. You’re coming with me. The fact that you never thought I could protect you hurts like hell, but I’ll deal with it later. But please Skye, for once in your life just trust me and come with me!” 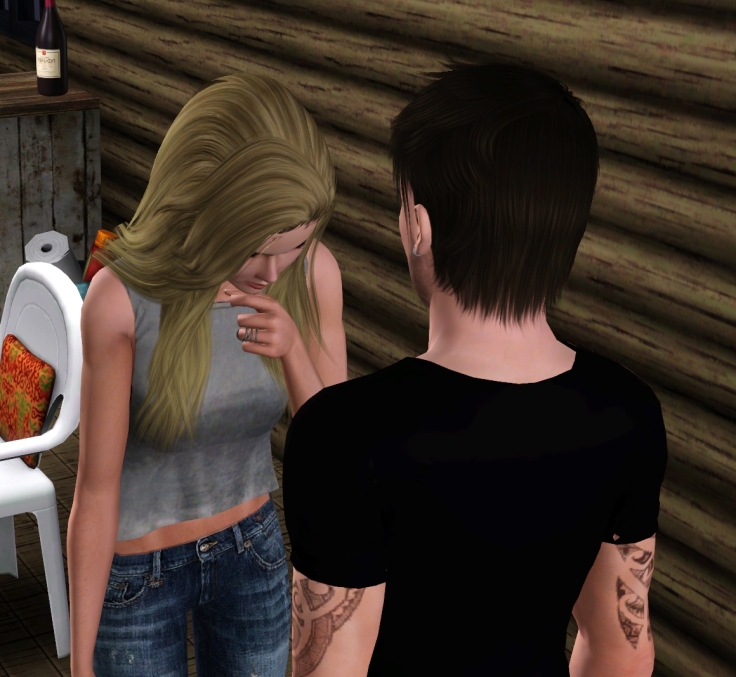 Jesse noticed that Skye’s face had turned white and that her hands had a barely visible tremble. She started coughing and when he touched her to make sure she was alright, her skin was burning hot. She suddenly collapsed on the floor while Jesse tried to grab her as swiftly as possible.

“Skye! Baby… please talk to me!” he cried terrified “Shit… I can’t lose you now that I found you again! Fuck! Please open your eyes baby, it will be alright..!” 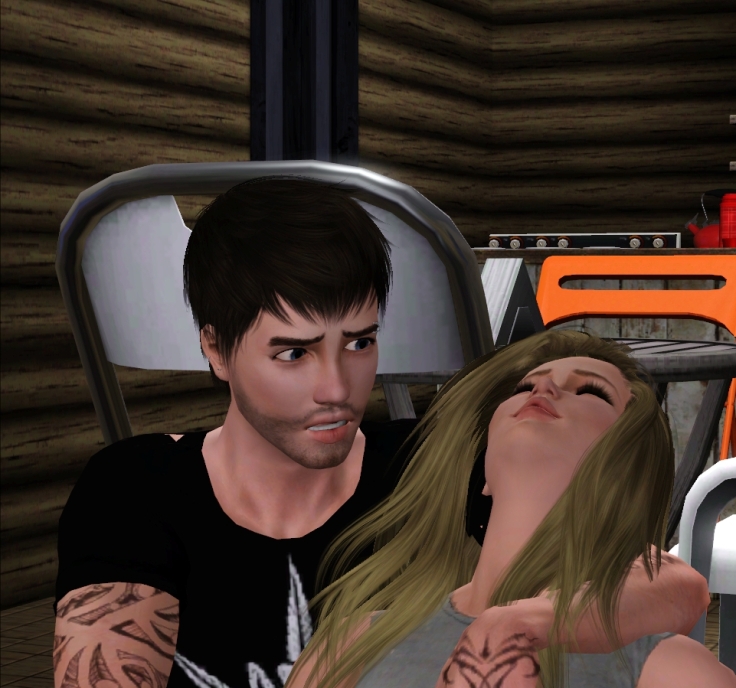 He soon realized with relief that she was breathing, but was burning up with fever. The hospital was a no-go, so he quickly decided he’d better take her to one of the band’s penthouse bedrooms, call a doctor and hope nobody notices.

And then… he would find a way to help her for good. He wasn’t sure how, but there had to be a way. For now, that meant ignoring her wishes and taking her home with him. As for later, well… he’d think of something. He was Jesse Frio after all. Up for anything. 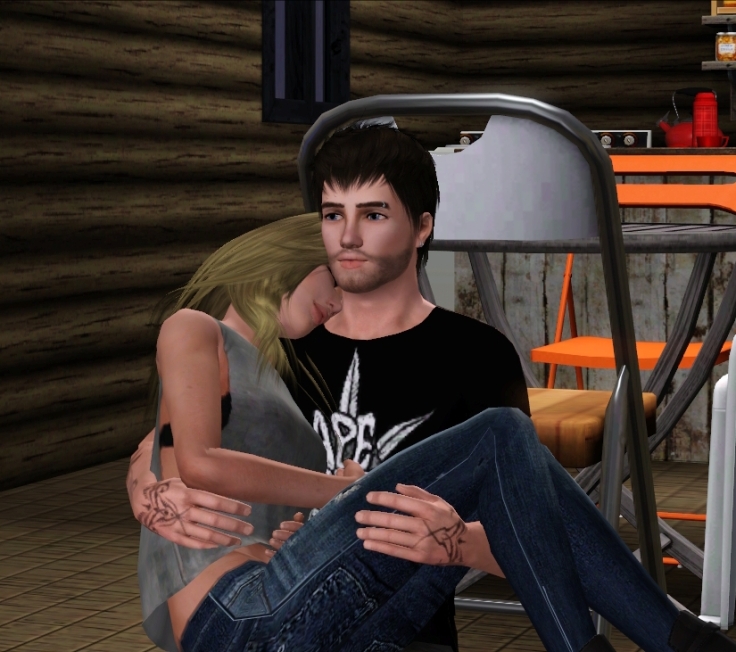 PS: Well, that chapter is finally done! 🎉 It’s a bit on the short side, and I know I said I had begun working on it before I finished the last one – and that’s the truth lol – , but I gotta say, it was a tricky one; I’m not sure if I’m totally happy about it, but at least now we’ll get to the most interesting part? Hmmm I hope so, lol! The bad news is that I won’t be able to write another chapter now that the wedding and honeymoon etc etc are approaching! 😭 But right after all that (that is a little more than two weeks from now), I’ll definitely be back with more Jesse and Skye and the others, and the rest of this messed up gen! 😉 I was hoping that by now we’d have moved on to gen 3 which will be a somewhat lighter, more carefree – but still dramatic – story than this one, but… life! 😁 I guess it will be some time until it’s little Alice’s (or Charlotte’s – haven’t exactly decided on the name yet, which is why I’m innocently putting those two out there, haha – if anyone’s up for an input) turn to shine! 😉 Sorry about my rambling and thank you so much for reading! ❤ ❤